I’ve written a couple of books, both of which were loosely based off of fanzines I put out in my early 20s.

You Idiot was mostly a collection of goofy articles about clearly absurd things (anti-drug video games, preachers who think My Little Pony was created by Satan, obscure books that teach you how to create cars out of thin air, and so on.) “Debating the Obvious” was its slogan and while it contained nothing hard hitting, and could have used an editing process that went deeper than “Press the Spellcheck button,” it was fun to write and had some funny bits.

Hit the Ground Stumbling was more of a “conventional” book, I guess, primarily about a guy I went to high school with who progressed from being a sullen kid in a religious family to sporting homemade satanic tattoos over the course of approximately fifteen months. The book looks at this transformation, and at both of our uneasy stumbles into adulthood. In retrospect, I should have left it as, “here are a bunch of funny, crazy, loosely connected stories,” like I did in the original fanzine (which was called Pick Your Poison) instead of trying to meld it into a somewhat more serious book like I ended up doing. I think the original format just fit the subject matter a little better. Still, some of it works.

UPDATE: Both books are now out of print! Probably not going to do another pressing of either of them. You might be able to find copies on Amazon or a handful of bookstores still. 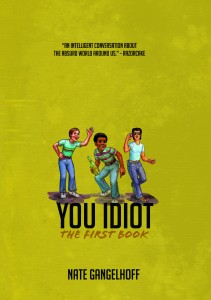 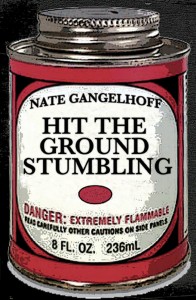