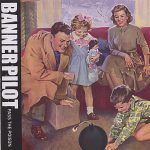 Banner Pilot‘s first release, a 7 song EP (originally 8 songs but we quickly became embarrassed by the Buzzcocks cover and removed it from later versions.) This feels almost like a different band… the songs are super raw and fast, almost comically so. In my opinion it’s nowhere near as good as our later stuff but it’s a fun and goofy record in its own way. We didn’t even use *guitar amps* on this, recording everything through those POD things. Not sure if they still even exist but I’m glad it’s not super obvious and dated at this point (I think?) If you like really fast, almost hardcore punk music you actually might dig this more than our later stuff.